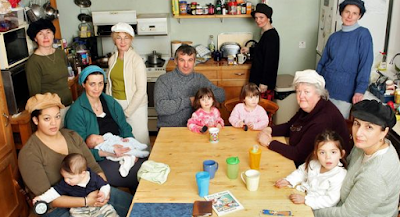 A polyamorous rabbi with seven “wives” and “at least” 19 children died after collapsing in the bathroom, an inquest was told.

Philip Sharp, 60, who starred in TV documentaries about his lifestyle, was discovered by a relative in Kenya.

He is believed to have written a note the day before he died, HertsLive reports.

The note included some rough detail on what he would leave behind for his family, adding “it’s not much”, before ending with, “love you all”.

Philip was born in Stanmore, north London, but his work as a missionary took him across the world.

He was the subject of documentaries including Channel 5’s The Girl With Seven Mums in 2015.

The show featured his daughter, who was then 10-years-old, showing what it was like to grow up with multiple motherly figures.

In 2006 he appeared in a BBC documentary called “Philip and His Seven Wives”.

It documented his life where he said he was told by God he was to become a Hebrew King and like a good patriarch, take multiple wives.

In 2018, he appeared on ITV’s This Morning where he was quizzed by presenters Eamonn Holmes and Ruth Langsford and forced to defend his lifestyle.

CHECKOUT:   Oluwo of Iwo EXCITED has woman throws herself on the road as his convoy passed

It is understood he had “seven wives” and at least “19 children”, and he once claimed God spoke to him to reveal polygamy was part of a divine plan.